Banging on about Greenham

I did a days filming recently for a bit of TV coming out next year on Greenham Common and I met Da Man; I mean he was wearing a Barbour coat, his name was Sebastian, he was extremely upper class and ex-military and he couldn’t understand why I or anyone was interested in ‘banging on about a bunch of angry women who bullied and shouted at the poor young American soldiers’.

I think the crew could see that I was about to abandon the Greenham principles of Non Violent Direct Action (NVDA) and channel the Slayer instead by replying, ‘allow me to answer that with a headbutt’ as I was dragged away by the director to do more shots in a bunker…but as you can imagine it left some important things unsaid.

So in the interests of being able to point people here if they have similar questions in the future (twitter misogynists, you know who you are), here are the reasons it’s vital we bang on about Greenham Common Women’s Peace Camp (not all of them, there are so many we would finally fill the internet, just the big hitters):

– It’s a protest that lasted nearly 20 years and radicalised literally thousands of women from every conceivable background, and still fires up young women when they hear about it to the extent that they are rightfully furious that they don’t know a bout it already. As more than one student has pointed out to me, if men had done Greenham it would be textbook fodder up and down the land!

– It’s the biggest women only, women-led protest since suffrage.

– It’s one of the biggest socialist campaigns in modern history.

– It’s probably the biggest and most visible example of lesbian political campaigning in modern history (please feel free to tell me of others, I’d love there to be more and I live to learn!)

– It’s arguably one of the most successfully left-wing protests in modern history, or indeed all UK history.  I’ll elaborate on this one a bit as people do quibble…

a) No mass slaughters unlike most land occupations and peaceful socialist uprisings throughout British history, that’s very cool and very much thanks to the NVDA tactics of the women

b) The camp had 3 main aims: to get rid of the nuclear warheads being stored at Greenham Military Base; to get the common given back to the people of the UK; to end patriarchy.

They massively contributed to, if not created, a world-wide debate around nuclear proliferation, changed hearts and minds around the globe and sure enough, the weapons did not remain at the base.  The women stayed on after the bombs though and worked with the locals to get the common given back to the people so we can enjoy it to this day (Watership Down was written based there, it’s really stunning land!).  Ok, they are still working on the end of patriarchy, bit more work to do there, but two out of three is better than any Sebastian has ever done!

Now I’m off to rewatch the season 7 finale of Buffy.

Choose your own Greenham story thread!
Greenham Game is Go! 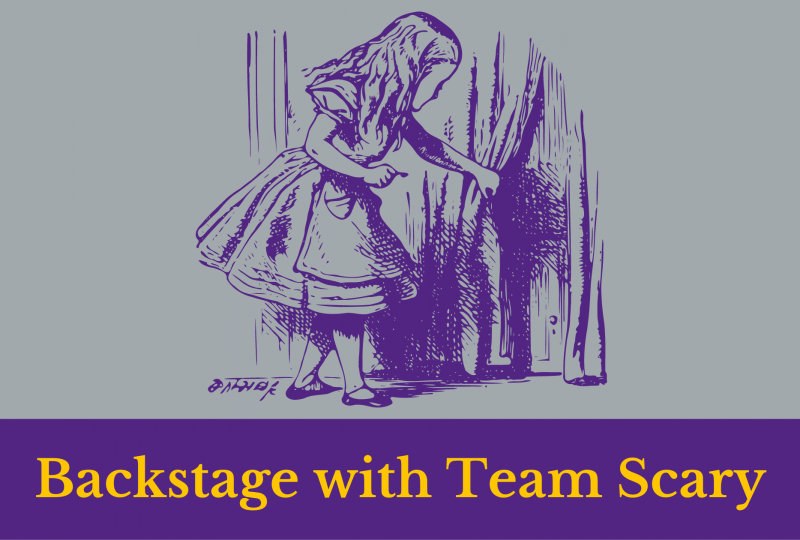 Backstage with Team Scary – February’s peek behind the curtain

Hello friends and welcome to the first of our Behind the Scenes blogs. In planning for our 20th anniversary celebrations,…

Naomi Paxton is one of SLG’s very favourite theatricals: a multi-talented performer and comedian; a fiercely clever and incredibly well-informed…