After graduating from Bristol Old Vic and working in film, theatre and television, Rebecca became disillusioned by the dearth of roles and opportunities for women.

A dynamic and enterprising artist, she created her own company to try and ‘level the playing field’, populating stories with fascinating, diverse female characters; and rescuing amazing women from the wastelands of history.

Rebecca has been intimately involved with every aspect of SLG, writing, directing, producing and performing to take the company from strength to strength. She is still also a grassroots campaigner against male violence and a frequent guest expert on BBC Radio and Sky News.

Adrian has volunteered with SLG ever since the charity was founded, helping in a variety of roles from sound technician to supporting the charity registration process; events organising to DJing at SLG cabaret nights.

As Company Manager, he underpins the Artistic Director’s work by providing financial and administrative support to ensure SLG’s continued day-to-day running. He supports with grant applications and evaluation, pulls together the annual accounts for audit and writes and coordinates the annual report for publication – amongst many other things.

Adrian’s day job working for a humanitarian charity, and experience in the wider not-for-profit sector, brings invaluable insight and context to SLG which complements and facilitates Rebecca’s artistic and strategic vision.

After ten years as a teacher, Sarah made the switch to arts management helping to found Sterts Arts Centre in 1986 and build its open-air theatre on Bodmin Moor. After a move in 1995 to the Barbican Theatre, Plymouth as General Manager, Sarah came back to Cornwall in 2006 to  The Works part-time as theatre development officer and also developing a freelance portfolio of work that has included producing two community plays. After The Works merger with Hall for Cornwall Sarah left in 2014 to work freelance as an Action Learning Facilitator across the South West and as Project Manager for Access Theatre as well as supporting and facilitating other arts projects.

With a successful background in Business and People Development and a passion for the Performing Arts, Tricia has enjoyed being a Trustee and Advisory Board member of the vibrant Scary Little Girls since 2011. In addition to her administrative role as SLG Honorary Secretary she also loves being involved with the theatrical events and artistic storytelling

Growing up in Fowey in the 1960s wasn’t very exciting so Sheila organised live music events in the town; if no bands were available she would carry her Dansette record player and collection of vinyl 45s to the Town Hall and run what would later be known as a disco. Marriage and running her own business meant there was little time to indulge Sheila’s passion for the Arts until 20 years ago when she was invited to write reviews for a magazine, this led to more reviews in other magazines and papers. Sheila was a Director of Restormel Arts for 10 years and Project Managed St. Austell’s Community Play in 2013 and Festival of Fun in 2018. Sheila is Director of Arts and Community at Radio St. Austell Bay where she has presented a weekly Arts programme for 10 years. Sheila is also Chair and Co-ordinator of St. Austell Torchlight Carnival.

Jane has spent over forty years working in the theatre. After a long and varied career in stage management working in regional, fringe and West End theatres she moved into producing. Following nine years with the highly regarded touring company Shared Experience, where she was responsible for numerous national and international tours, she moved to English Touring Theatre. She was Executive Producer at ETT for twelve years, producing more than 48 productions touring throughout the UK and established ETT Forge to mentor and support companies and artists interested in touring their work. She is the Chair of Flute Theatre and also sits on the boards of Derby Theatre and Joe Public Marketing. In 2017 she was named Theatre Employee of the Year by UK Theatre. She received an OBE for Services to Drama in the 2018 New Year’s Honours List.

Ellie is a producer and director in theatre, tv and live events. Ellie, and her business parter Jenny Kane, own and run a creative events company. They are the founders of Rave-A-Roo, a theatrical take on a rave for families, selling over 15,000 tickets since 2016. Rave-A-Roo won Best Family Entertainment in London at the UK Hoop (A What’s On Guide) Awards 2018 with over 40,000 votes cast by parents. Ellie directs theatre for Scary Little Girls and Dirty Protest Theatre. Ellie also writes and directs shows for childrens’ brands such as Freemantle, Aardman Animations and BBC Worldwide. Ellie is the Assistant Director on the annual CBeebies Christmas Show since its inception in 2013.

Anna is well known as a writer and ‘Word Witch’. She has worked with Kneehigh almost from the beginning. She has written shows including Tristan & Yseult (with Carl Grose), The Red Shoes, Don John, and Midnight’s Pumpkin, and leads the Kneehigh Rambles programme, working with young people and communities. For the past three years, she has been walking the Roads less Travelled in Cornwall, collecting, re-inventing and exaggerating stories heard along the way.

She co-runs The Story Republic, part of KEAP.

Deborah returned to Cornwall after many years of exile, living and working in London. She has been actively involved in the voluntary and the statutory sectors at national and local level for over 45 years, as a board member, trustee, director, employee and volunteer in organisations covering a wide range of social welfare, environmental and cultural areas.

Statutory appointments include a three-year appointment to the National Parole Board; Justice of the Peace; Member of the Board of a Regional Health Authority. In 1994 she was awarded an OBE for ‘services to the community’.

Now she spends her time striding along the cliff tops, making ceramic mermaids and supporting Cornwall’s rich culture, its theatre and arts; she is a Board Member of the Royal Cornwall Museum, a member of the Board of Trustees of the Cornwall Community Foundation and the ‘Visitor/ Assessor’ for the Henry Smith Foundation for Cornwall and South Devon.

Welsh-born actress Erin Richards is currently starring as ‘Barbara Kean’ in Fox’s Gotham.  She has had a successful career in the UK and USA appearing most notably as ‘Molly Hughes’ in Fox’s Breaking In and ’Nancy Reid’ in BBC’s Being Human. More recently she has moved behind the camera with her writing, producing and directorial debut Hot Girl a short film about an actress struggling to find her power in an industry bent on reducing women to ‘hot girls.’

Erin has worked for several theatre companies, particularly enjoying directing or writing short pieces with a dark comedy twist which suit her feminist observations of the theatre, tv and film industry. Erin is overjoyed to be asked to be part of the Scary Little Girls family and is honoured to be patron for such an important company.

Michèle is Director for Change with the Ramps on the Moon consortium, a group of 6 mainstream, mid-scale theatres with Graeae Theatre Company working to increase the number and visibility of D/deaf and disabled people across the theatre sector. She has nearly 30 years of experience of working in theatre, firstly as a write, performer and director and then later adding training and consultancy in equality and diversity for the arts sector.

As a disabled person who is committed to the power of telling diverse stories in unexpected ways, Michèle is excited to be a part of the Scary Little Girls Journey.

Bidisha is a British broadcaster, film maker and journalist specialising in arts and culture and international human rights.

Bidisha is a presenter for the BBC, hosting programmes such as Woman’s Hour, and a writer for The Guardian and The Huffington Post.  She says ‘Scary Little Girls is shaking up the theatre world with brilliant and innovative work and a revolutionary working practice. In form and content, style and substance, philosophy and script, action and words SLG is replacing the old, sexist ways with something far more just and powerful, thrilling audiences will amazing new work all the way.’

Cornish born and raised, Sue Hill is an actor, theatre maker, curator, writer and visual artist. In 1988 she joined Kneehigh, helping to grow their distinctive style of theatre. With Anna Murphy, another Scary Patron, she invented and re-imagined Cornish festivals, including Tom Bawcock’s Eve, Mazy Day and City of Lights. From 2000 until 2006 she was Artistic Director for the Eden Project, commissioning artists, writers and performers.

With her brother Pete Hill she has made many large scale earth sculptures, including the celebrated Mudmaid at Heligan and the Dreaming Girl for the Chelsea Flower Show (www.peteandsuehill.co.uk).

She designed the head of the Man Engine, the giant mechanical miner that processed through Cornwall in 2016 (www.manengine.org).  She has been a member of WildWorks since 2005 working on most projects including ‘The Enchanted Palace’ at Kensington Palace in 2010 and The Passion in Port Talbot with Michael Sheen in 2011 (www.wildworks.biz).

She is Landscape Director at WildWorks, member of the Creative Team at Eden Project International and an Honorary Fellow of Falmouth University. 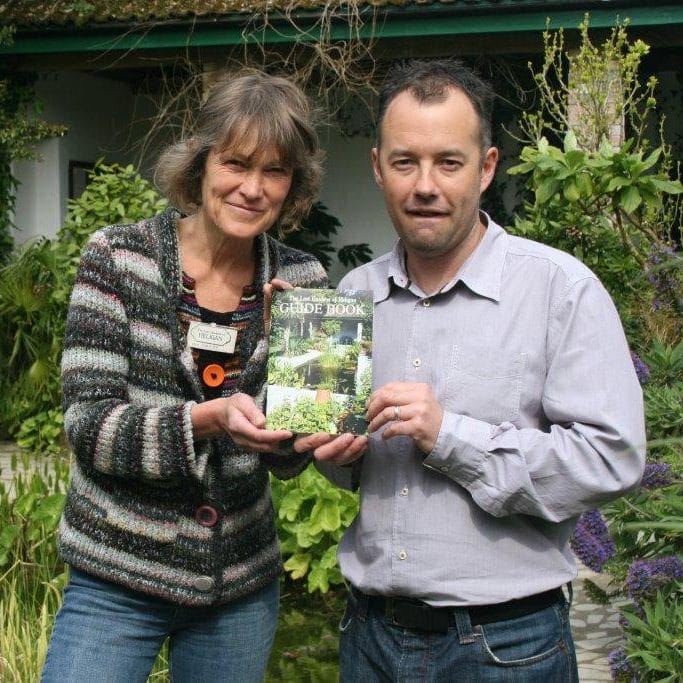 Born in Oxford, Candy spent her childhood in the home that Lewis Carol purchased for his sisters in Guildford, where Cheshire cats and white rabbits continued to appear and disappear. Her father was a great story teller and a landscape artist, intrigued by the science of perspective, so every summer holiday was spent somewhere scenic… mostly Suffolk and beloved Cornwall.

Candy studied at Camberwell Art School and Durham University, in Social Sciences. Durham was where she met musician Tim Smit. They moved to Cornwall in 1987, with three small children and no prospect of work.

Discovering and devoting time and love to Heligan over thirty years has led to many precious meetings of minds with creative people from near and far. Writing is Candy’s first love, project managing all the Heligan publications, including art books with Sue Lewington, Mally Francis and Martin Impey. Protecting and enhancing the spirit of place requires the courage to say ‘No’, as well as taking those fabulous leaps of faith.

Sometimes jewel creative relationships emerge. In August 2014 Heligan’s partnership with WildWorks and the communities of Mevagissey, Gorran and St Ewe resulted in the landscape epic 100: The Day Our World Changed. The privilege of working with Bill Mitchell won’t ever be forgotten.

Shazz and Becca’s enduring enthusiasm for Heligan has resulted in contrastingly intimate pieces, evidencing the life-changing experience for young actors themselves. For me this has shone an even brighter light on the value of performing arts. 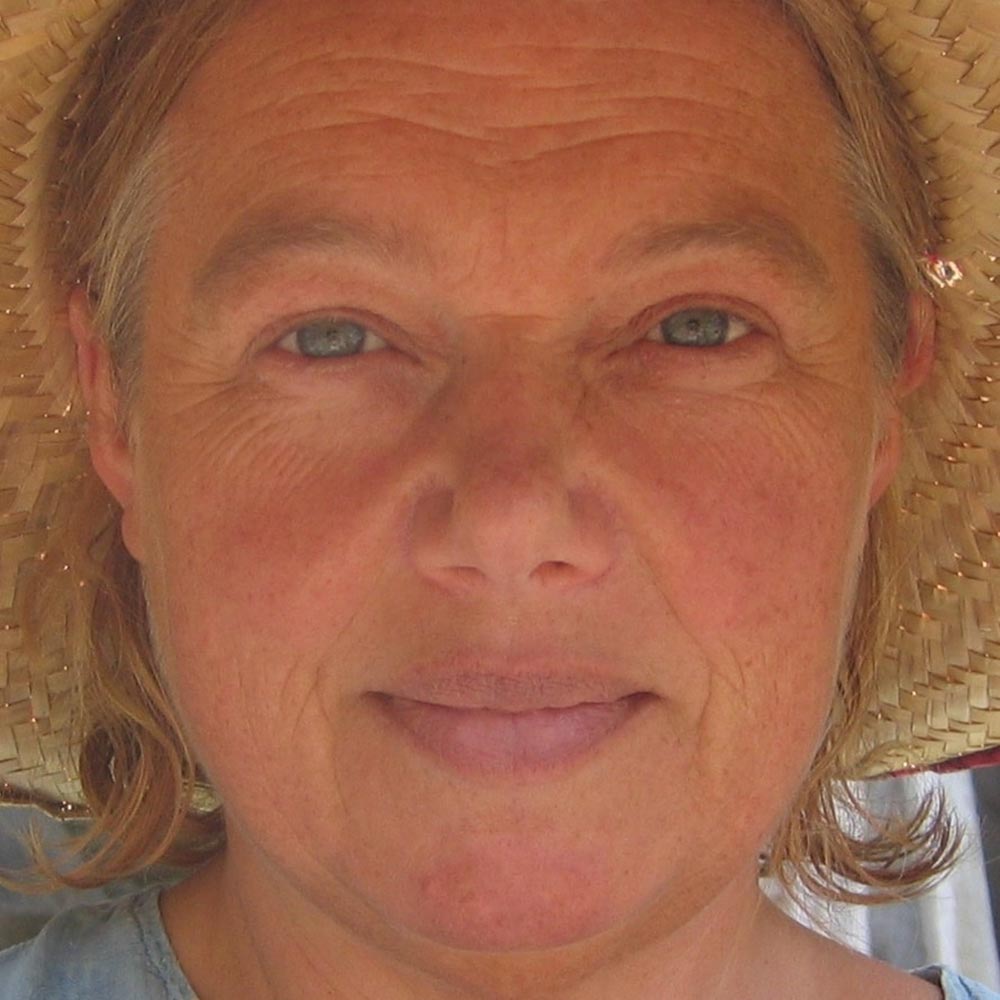 Jane Darke is a documentary director, painter and writer. She made a film about Atlantic debris, The Wrecking Season 2005, and The Art of Catching Lobsters, about grief, 2009. Her most recent film was about the poet Charles Causley (2017), all were broadcast on BBC FOUR. She works and exhibits at Tregona Chapel, St Eval, on the North Coast of Cornwall. Her book Held by the Sea was published by Souvenir Press in 2010. Jane has also made several radio programmes BBC Radio 4.